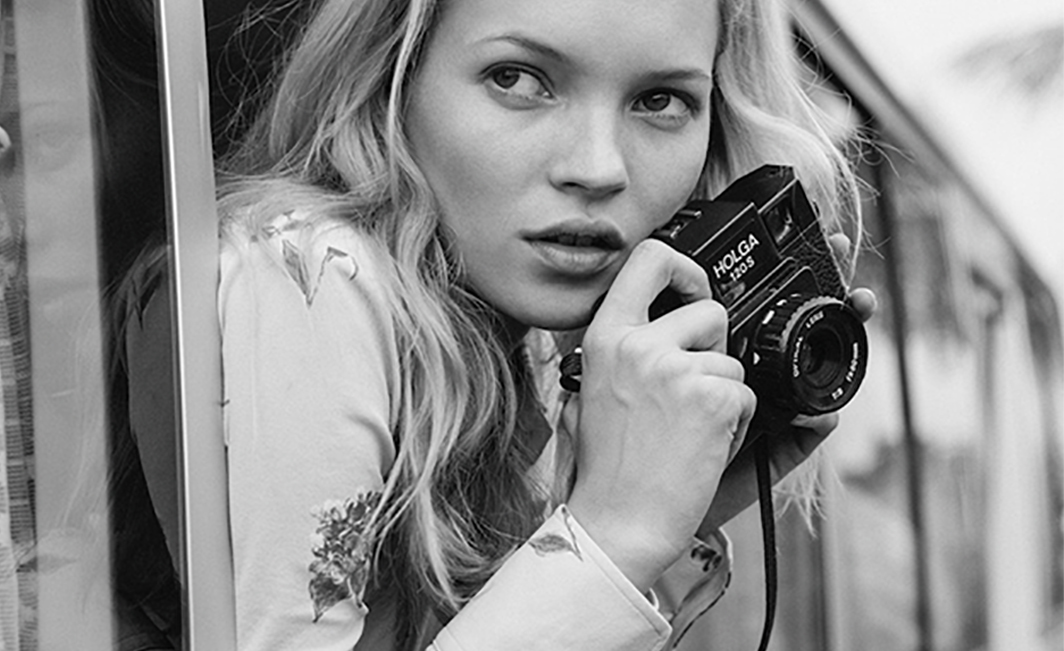 To see a Bruce Weber photo is to see something familiar and mysterious: an idealized version of America, one that’s both tantalizingly close and impossibly romantic. It is in large part thanks to him—and his work in the ‘80s and ‘90s, for brands such as Calvin Klein, Ralph Lauren, and (most famously) Abercrombie and Fitch—that we have a notion of “all-American” beauty. Weber’s photographs mostly feature strapping young men and women, in various states of undress, frolicking in rivers and fields, seemingly without a care in the world. (Dogs often make appearances, too.) For good reason, these images have lodged themselves in our national consciousness.
But the Pennsylvania-born photographer, it turns out, is something of a travel fiend. “Far From Home,” his new exhibition at Dallas Contemporary, tracks his journeys across the world, from South America to South Africa, on assignment for magazines and brands. Many of his longtime muses make appearances in the nearly 300 photos—Kate Moss chief among them—but Weber demonstrates a breathtaking ability to capture the everyday splendor of a place and its people.

We spoke to Weber about the origins of the show, as well as his early travel days.

MATT MULLEN: I read that this is your largest U.S. exhibition to date—what was the curating process like? I imagine it would be overwhelming.

MULLEN: Did you have a starting off point, such as a specific country? How did this whole idea come about?

WEBER: I talk at the beginning of the catalog about a woman who taught me history in boarding school. Her name is Mrs. Farnum. It was down at the Hun School in Princeton, New Jersey. She was a very elegant woman; she always smoked with a cigarette holder. In those days teachers would smoke in class. We would all ask normal questions, you know, about the government of a country. But she didn’t have much interest in that, she liked that history was gossipy, and that it was kind of fun, and sexy, and romantic—all that kind of stuff. It really made you get into history, and all the glamor and drama that history has. So I thought a lot about her when I was working on this exhibition. I’m looking at some pictures now of Kate from when I went to Spain. We were in Seville. There was a boy on the trip we were photographing. They kind of fell in love for three days. I like that attitude, of falling in love for three days.

When you have a camera and you travel, people really open up to you—at least they used to be. Now it’s a little different because everybody takes pictures, and they’re so used to people taking selfies and things with the cell phone, etcetera, etcetera. I always tell younger photographers the best place to go to take pictures is Sweden, because the people are so generous in terms of willingness to make a nice picture. And they’re so polite. Everybody’s a lady and gentleman. Compared to when you’re photographed on the street in New York, people are yelling at you. It’s hard. I don’t know if it were like that now, when I was starting out, if I’d be able to become a photographer. I knew Diane Arbus back then, and I studied with a good friend of hers, Lisette Model. And Lisette forced us out on the streets. She forced us to confront people and have experiences, and not be afraid. And I think because of that, even though it was a different time, people were like, “Oh, you want to take my picture? Go ahead.” You know what I mean? Now that doesn’t really happen too much.

MULLEN: When you were growing up did you have a lot of wanderlust?

WEBER: In what way?

MULLEN: Geographically speaking. Did you find yourself wanting to travel, to go see different places? When did that kick in?

WEBER: My parents would go away to Europe for a month and a half; they’d get a car and drive around, a Mercedes. And my grandparents would take my sister away for the summer. I’d be stuck back home in a little farm town in Pennsylvania—completely depressed and neurotic. [laughs] I think maybe I should tell you a little about a trip I took. I went with a teacher from boarding school to Europe. There were five of us guys, kind of preppy types. We traveled a lot, we went to Italy, we went to France, we went to England, and we went to Ireland together. Anyway, our teacher who was from Ireland, he taught history. He would always want to talk to me privately, and it was always about my roommate on the trip, who was this really great looking soccer player. He was sort of falling madly in love with him, and he was upset this wasn’t working out. So I became an adult really quickly, growing up with all these young guys. And I was sort of like their older brother, meanwhile I was the same age, and I was less sophisticated than they were. Finally one night in London, we went out for dinner, dressed up with our jackets and ties on. And the teacher—he was getting drunker and drunker—and finally he burst into tears and confessed his love for this boy. And the boy freaked out and said “I’m out of here”—so I ran after him. I felt sorry for the teacher too. So I ran back, and he was gone—he just left us there.

MULLEN: Oh my god. He left you in London?

WEBER: Yes. And we had the rest of our trip in Ireland to go. So I sort of took it upon myself to get the trip together and go there. We went to Dublin, and we were there for about five days. And we had this amazing time; there was this extraordinary sense of freedom. In a way, that was how I was introduced to a country, and being on my own, without my parents, and really having no security whatsoever. We took pictures of each other. We photographed places, and we met interesting people. We went to a bar once all together, in Paris, without the teacher, and it turned out to be this big hooker bar, all these prostitutes. But all the girls looked like American movie stars. They dressed like a certain movie stars. I liked Elizabeth Taylor a lot, and there was a girl there who looked just like Elizabeth Taylor, and she was so beautiful. And I remember, here we were, 16-year-old kids, drinking in a Parisian prostitute bar, with these girls who look totally like movie stars. It was so great, the images. So when I go to Paris to do the collections, or whatever, I always think of that time, and it makes me really happy.

MULLEN: In going through your archives, and getting a bird’s eye view of all your years of work, and all the different places you’ve been, did you learn anything surprising about yourself or about your work? Were any dormant memories unlocked in the process of curating?

WEBER: When you look at a body of work, you always say, “How old was I when I photographed these?” I always wanted to be like this guy I was quite fond of, Allen Ginsberg. I met Allen when he was in his mid to late 70s, and he was like the youngest person I ever met. And then I met Paul Cadmus, and Paul—I photographed him a lot, he’s probably one of my favorite men to photograph—he had long, grey hair down to his shoulders. He was about 90, and he was also one of the youngest people I knew. So I look at these pictures, and they’re pictures by somebody who was very young at heart. That’s what makes me feel very nice to see. Because they have—I’m not saying they’re good, or they’re bad—but they are a record of my youth, in a way.

MULLEN: This show is about travel, and about you being immersed in these different cultures all over the world. Do you see yourself as an outsider, or an observer, when you’re in a different culture? Because I look at your photos, and they’re so intimate. They don’t look like they’re from an outsider.

WEBER: When we went to Vietnam with Kate, for American Vogue, I had a lot of problems with it. Because I was like, “How do I rationalize that I’m going to a country where so many men and women have died for America?” And there I’m going and doing pictures of a girl in a dress. So when we first got there, I read a book by Christina Noble, and it’s about how she started an orphanage for street kids, and a hospital. I decided to meet her when I was there. So I took my whole crew, and we went to the hospital. We spent the whole afternoon meeting all the kids, and seeing the kids at the hospital. We were all kind of meant to be there. Isn’t that the way it is, when you go somewhere, and you take a picture, or a Polaroid, and you have a record of it? Somehow you were meant to have that in your life. That’s what I love about taking pictures.

MULLEN: That’s a really nice way to put it. Before you’re going to a place, do you like to do research on it beforehand? Or do you like to jump in and then scope it out from there?

WEBER: I always do a lot research. Robert Mitchum, who I’ve been working on a documentary about for many years now, he used to say, “When you go to a new town or a new place, you always do two things at first: You try to meet the chief of police, and you try to meet a blonde.” [laughs] So I always try to take that into account. Sometimes it’s not the chief of police, it’s a lady who’s well known for her gardens. And sometimes it’s not a blonde girl; it’s a blonde guy who’s the star lacrosse player. But I always try to meet somebody right away, and they just lead me down a path to where I am.

MULLEN: How do you meet those people? I feel like you have an uncanny ability to find the most beautiful and interesting subjects to photograph.

WEBER: Thank you. I don’t think about it like that. But people say that to me, and I kind of laugh. And then I think, and I look at the pictures, and I think, “Yeah, they were pretty special, and I was very lucky.”

MULLEN: You would call yourself extroverted, right?

WEBER: I think I’m introverted. I couldn’t do what we were talking about if I didn’t have a camera.

MULLEN: So your camera is the entry point into a connection with someone.

MULLEN: Do you have a favorite place that you’ve been?

WEBER: I don’t travel now as much as I used to—we have six dogs, and I don’t like to be too far from home with them. And yet this is called “Far From Home,” this exhibition. [laughs] But I’ve been driving around America this year, trying to find out what’s going on in the country, and trying to find out who are the people living between L.A. and New York, you know? And it’s really interesting, just learning about America again. It’s been quite extraordinary.